Fabulous and magical Santorini! We had enjoyed you only for four days, but you fascinated us once and forever with your white houses and monasteries on multicolored rocks, breathtaking views of caldera and an active volcano which turned you into a crescent about 3.5 thousand years ago. Living on Crete for several weeks and being inspired with the Cretan atmosphere and raki, we went on a voyage to Santorini Island for beauty and invigoration.

The speedy liner brought us quickly to Santorini over the blue sea. We were surprised by the two things: Santorini's port, small and fussy like an anthill, and the rocky cliff with an almost vertical serpentine road! When my son, who had already got used to the Cretan winding mountain roads, saw WHERE we had to go up, he shook his head and said ‘Oh, no!'. However, we still made it by taxi! 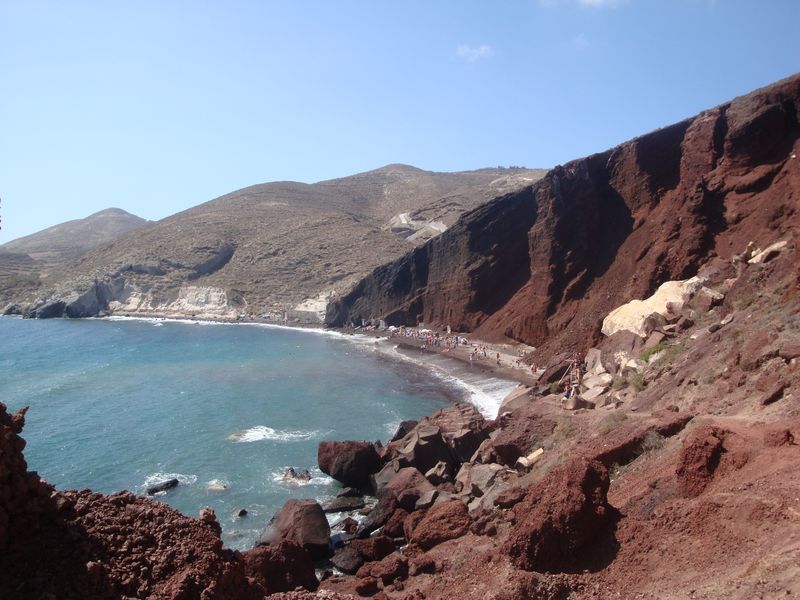 Having left our suitcases in the hotel, first of all we went to swim at the Red Beach. There were big waves and the brown beach sand was mixing with the seaweeds. A narrow road comes down to the sea, so you need to make your way through the boulders. 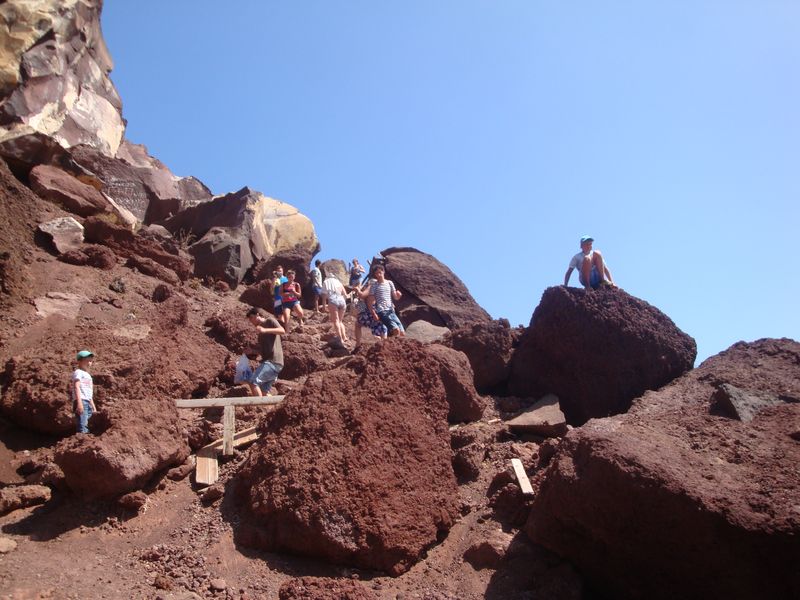 Because of possible landslides that can happen in that area, there is a rope stretched along the beach which the visitors are not to go beyond. On that day all the people were sitting behind the rope, since the waves simply gushed over it! There were also some curious doors right in the beach rocks, but I didn't check where they led to 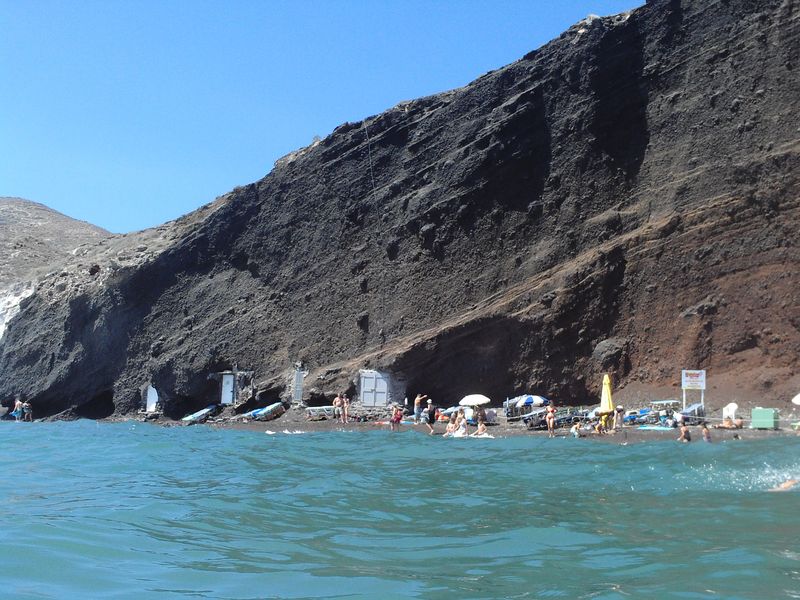 There are the White Beach next to the Red Beach, a nice tavern called Dolphin and an archaeological site located nearby.

Next day we went on an excursion to the volcano by a wooden ship styled like a sailing vessel. 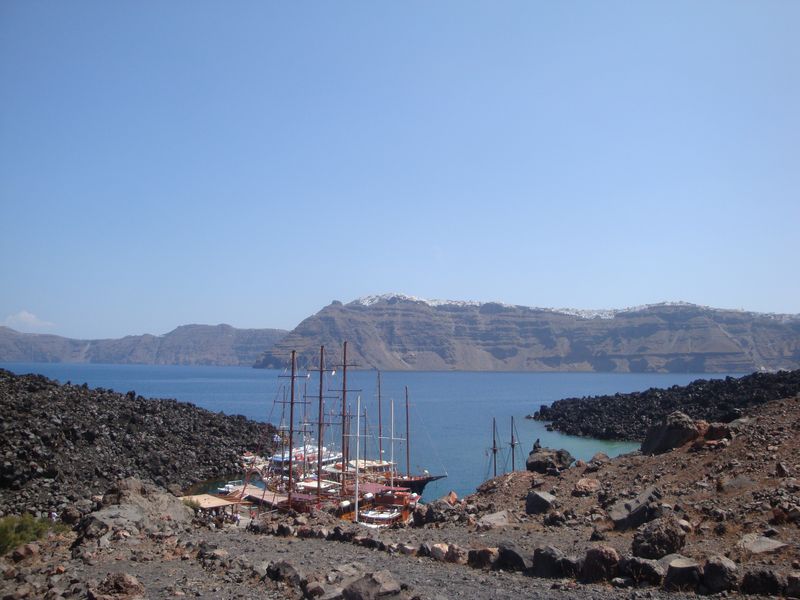 How does the volcano look like? The volcano (or Nea Kameni island) is a heap of black cobblestones, a line of tourists crawling like a snake along the bald mountain, the scorched earth and the extraterrestrial landscapes. 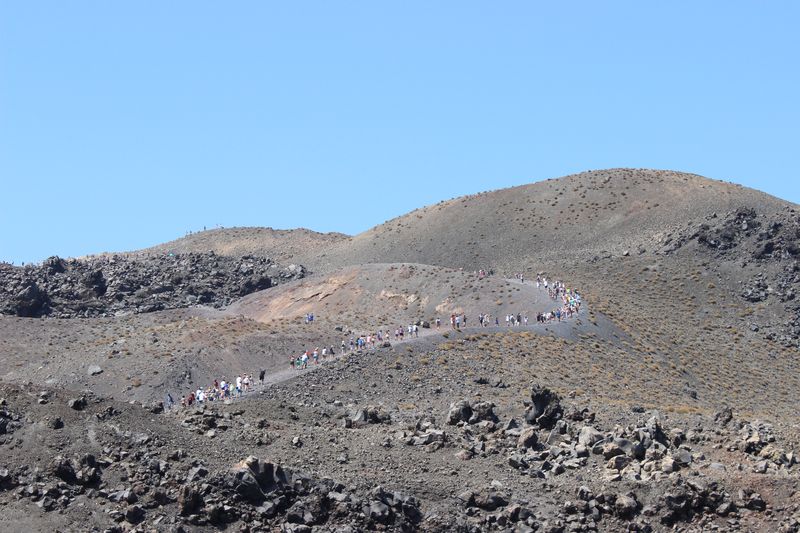 But there are such grandiose views of Oia, Firá and Therasia! 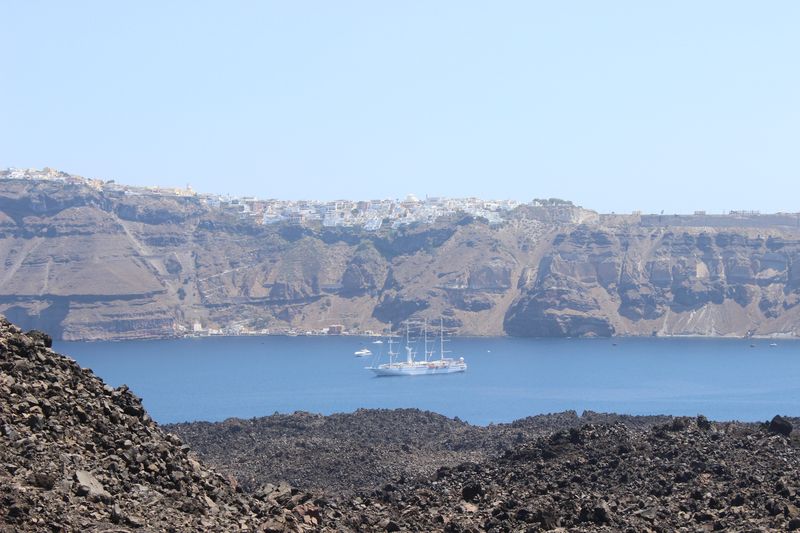 The volcano is active, it breathes, and it is set with the earthquake detection stations. Near Palea Kameni islet there are rusty sulfur springs where you can swim. 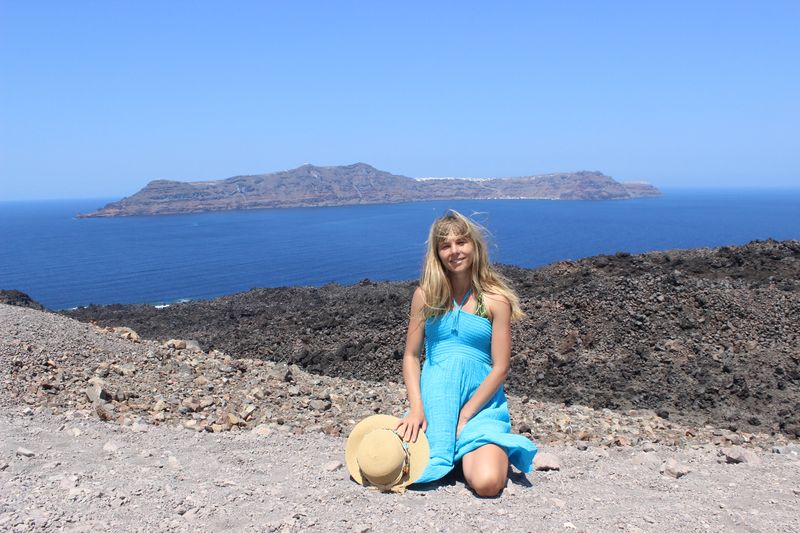 To enjoy your bathing you need to dive from the ship and swim towards them. The water of those springs is rather warm than hot. You should take enough fresh water and an old swimsuit on board, because the nice rusty color of your bikini or swimming trunks will remind you of your sulfur bathing for many days

After the bathing in the warm orange waters of the sulfur springs, we enjoyed the swimming in the cool blue waters of Therasia Island (Θηρασία). 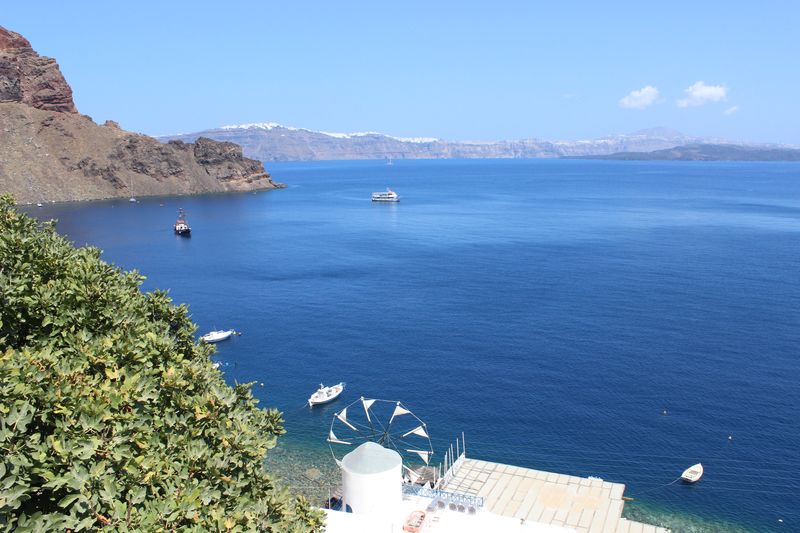 All these islands are the reminders of the previous "greatness". After the volcano explosion that had partially destroyed the island, the water gushed into the newly formed empty space having filled up the entire gap. When swimming you can clearly see the depth which looks like a deep blue abyss under you! They say that Santorini's inhabitants had sailed away a while before the volcano explosion. Later the giant wave reached Crete and destroyed the Palace of Knossos, and even the Lasithi plateau on Crete was covered up with fish!

Then we sailed to Oia (Οία) to celebrate the Sunset. The white houses on the red coloured rocks looked fabulous and everyone hurried to take pictures on board! 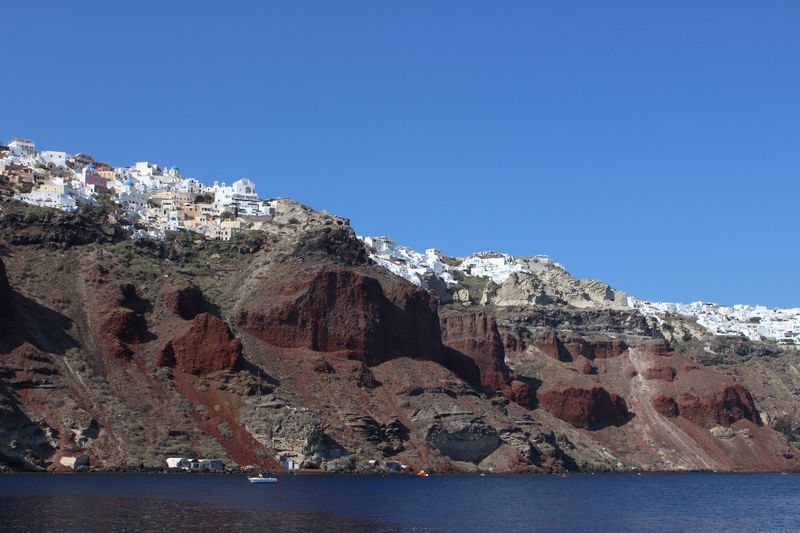 Santorini's inhabitants decided the housing problem easily by making the houses in the rocks; therefore the ceiling of one house is often the floor of another.  We had a thrilling experience riding donkeys on the way upstairs to Oia. Those people who prefer to climb the stairs on foot have nowhere to go from this loud running donkey horde whipped by the local Greeks and hurrying to the top in a hope for rest. Sometimes when one donkey squeezes between the two others you may find yourself on the very brink of the rock that takes your breath away both for the picturesque views and the extreme height! When donkeys stumble on the stairs your heart sinks a little bit. To donkeys credit I must say that they never fall down (at least that's what local residents say)! 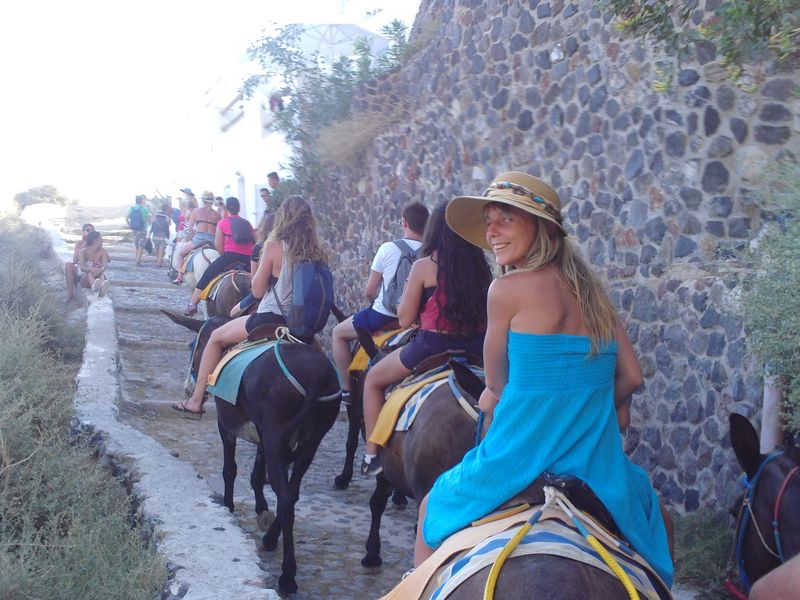 Oia looked like an enchanting toy town with its ­narrow, twisting side streets passing into each over, souvenir, art craft, and jewelry shops, as well as the shops selling wine which is worth tasting right on the spot! 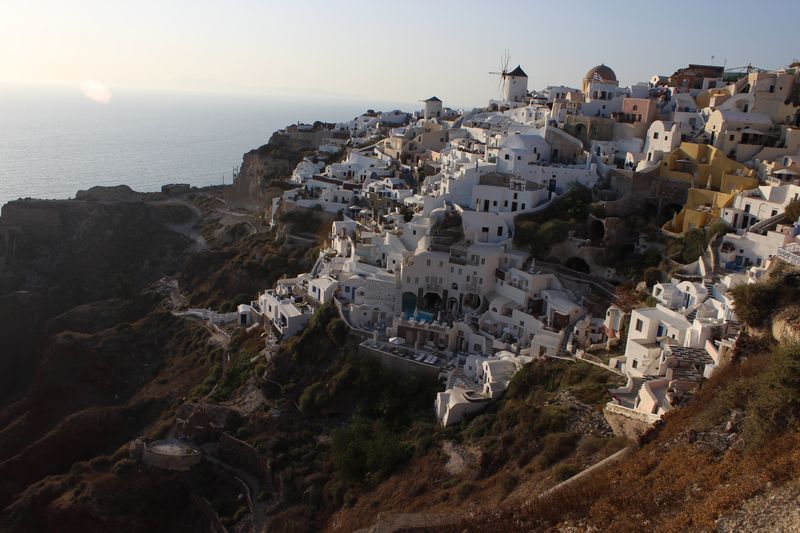 One of the Santorini coasts comes abruptly and impressively into the blue see, while the other coast is unexpectedly slope. I hoped to stay there, to fashion a vase from clay, to paint and admire the boundless glassy sea, as well as to enjoy the exclusive Santorini wine made of grapes cultivated on the volcanic soil. Prices of some kinds of the exclusive old wine reach several thousand euros, but you can well afford to buy some worthy samples for 30-60 euros

Amateurs of sweet wine will appreciate Vinsanto (Βινσάντο), the natural sweet wine made of  grapes dried under the sun, which is probably the most popular and really tasty wine on Santorini! There are two other famous sorts of Santorini wines: Assyrtiko (Ασύρτικο) and Nykteri (Νυχτέρι). We liked the Nykteri wine due to its rich and extraordinary taste.

What is the best place to admire the sunset? They said that it was one Venetian castle on the top of the rock and we found it. The Santorini sunset is a great reality show gathering several thousand people every evening. Therefore you should take seats beforehand, maybe  two or three hours in advance, or you will not take nice photos. It's easy to see why Greeks call the sunset ‘ηλιοβασίλεμα' – the king of the sun. 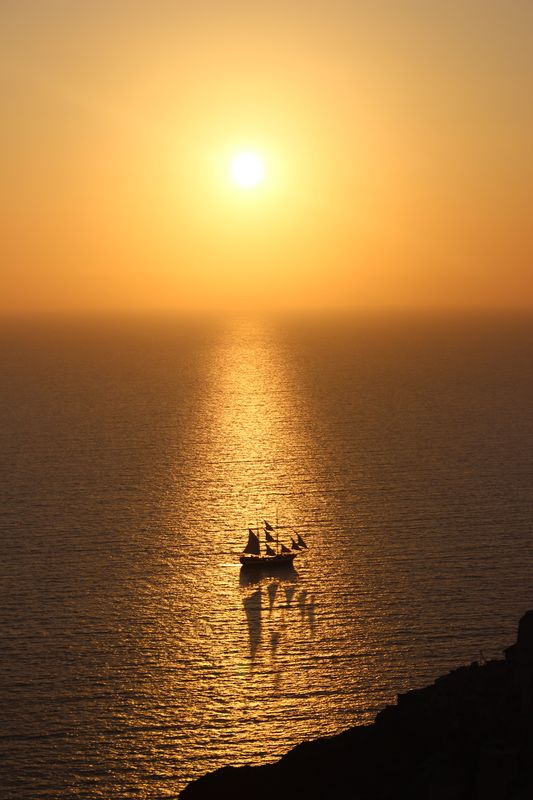 My son jumped down to the dilapidated part of the Venetian castle where he was almost alone. His neighbors were only two Japanese, and I must say that the people from the Land of the Rising Sun like Santorini very much as they like all beautiful and elegant things. 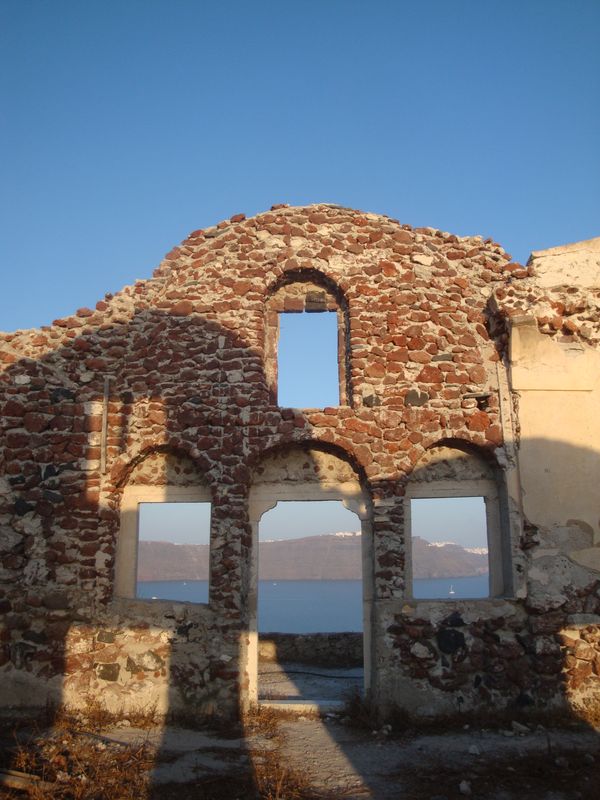 Take a professional camera, a bottle of Santorini wine and take seats on time to make excellent photos! That evening the girls and women dressed in beautiful garments and tunics looked like the Greek nymphs. Santorini, especially Oia, is a lovely place for weddings, honeymoon, and spending romantic time together. It also works fine for getting away from colourless daily routine dive into the intense Greek blue holidays! The audience applauds to the sunset and then pours out into the streets which become crowded as in rush-hours.

On the third day we visited Firá (Φηρά), the capital of Santorini Island, and the museum which represents the richness of the Minoan and Cycladic cultures. There are beautiful frescoes in Egyptian style with the papyrus flowers and the frescoes depicting the blue monkeys that we saw on Crete in the Knossos Palace. 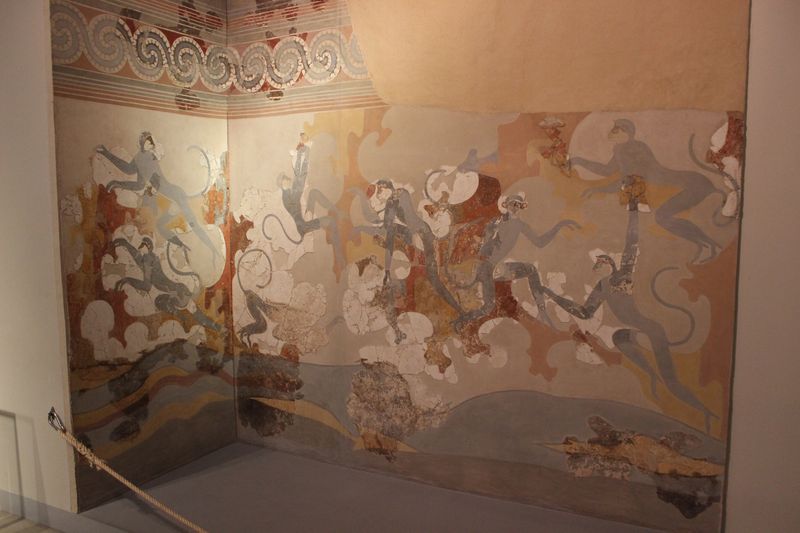 The pride of Firá museum is the golden goat. 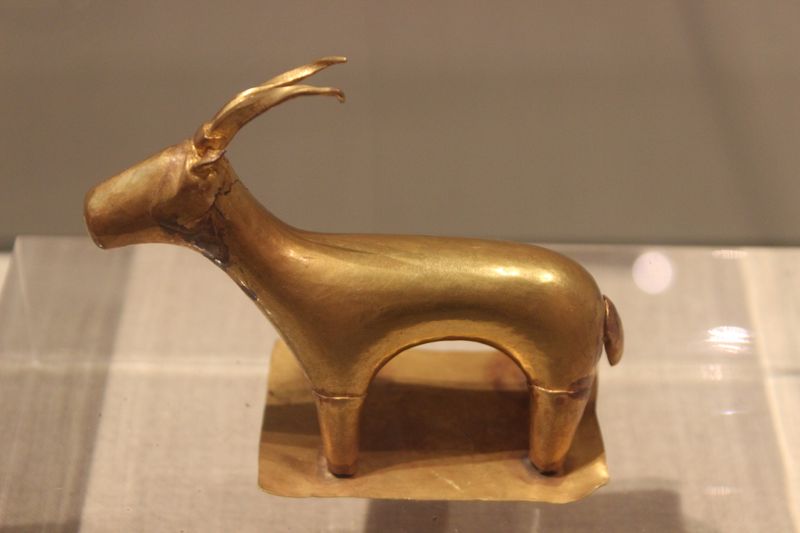 Firá is good for visiting a museum, as well as for shopping, so you don't want to leave this town. 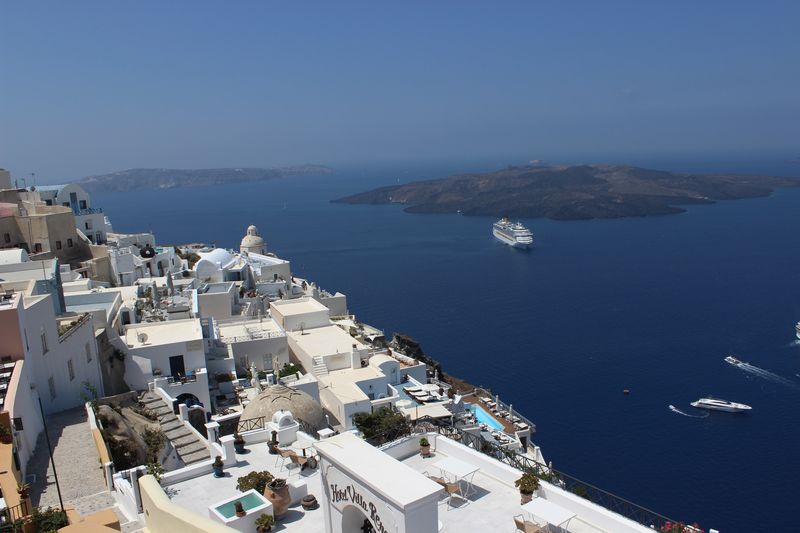 Fira is situated 200 metres higher than Oia, and there is even a funicular! There are also donkeys but their string climbs unhurriedly and with dignity

We spent the last day lying on the black sands of Perissa. This is a long calm beach on a sloping Santorini coast. We made a photo shoot of fish and saw an interesting layering on the bottom. 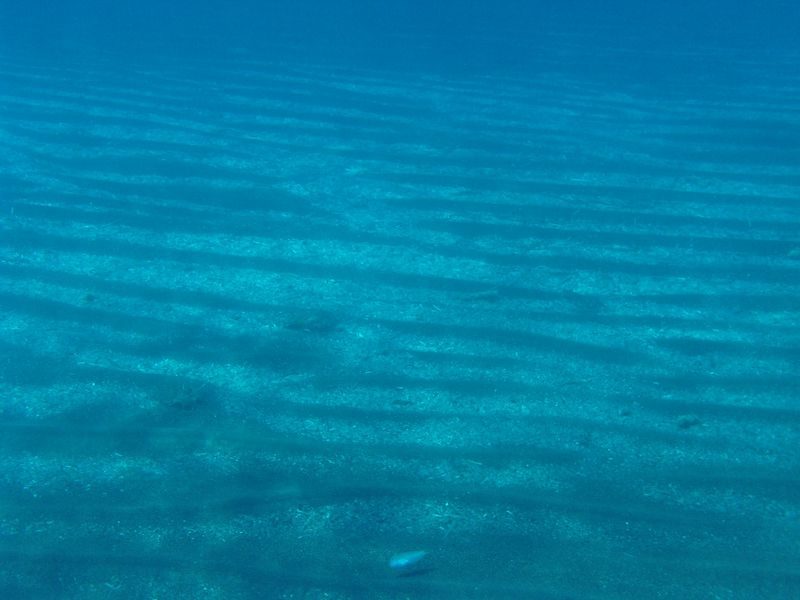 The sand is hot and gray in daylight, but it becomes darker when getting wet. We really enjoyed the hospitable and friendly atmosphere of Smaragdi hotel where we lived. Thanks to the kind-hearted manager Maria for her exceptional hospitality!

We spent only four days on Santorini, but those days were so impressive and tremendous that we remembered them as great and fascinating travel! Thank you, magic Santorini, we were going home to Crete!..

03. Curious doors in the rocks

06. Ships in the harbor at the foot of the volcano

07. Line of tourists crawling along the bald mountain

08. Sultry walk along the volcano

16. Sea view from the donkey path

17. Riding donkeys on the way upstairs to Oia

18. White houses on the rocks

21. Breathtaking view with a spinning wheel

23. View of Oia from the ruins of the castle

26. On the ruins of the Venecian castle

27. An ancient wall in the rays of sunset

29. Silver and gold of Sunset

30. Sailing into the Sunset

38. Vases from Knossos and East Crete

45. Vase with swallows and kymbe with dolphins and ibexes

47. Embankment in front of the main cathedral of Firá

48. Gorgeous view of the volcano

50. Touristic gathering round the volcano

52. The black sandy beach of Perissa

54. Stripes of white seaweeds on the black sand
Showing 54 results.
of 1
First Previous Next Last